The animal-like mobilization requires all resources and effort to stay in this state of readiness. Animals mobilize to hunt or to defend. And have to replenish their inner resources, so that they can mobilize again for the new hunt or defense. This animal-like state of readiness in the human is always followed by exhaustion, tiredness, weakness, and less rational decisions.-  Scientists call this a fight-or-flight response/state. (Most of the individuals experienced this state in their lifetime).

All objects, big or small (planets, humans, animals, insects, atom, etc), use and save itself with this power of mobilization. By doing so, they expand its energy in order to persevere, to exist. In other words, they mobilize (to survive), expend the energy of mobilization, and then search/hunt again for replenishment options, so they can mobilize again under pressure from life. Mobilization is where humans, or any other animal, are in a state of readiness from the start to the end of the action. It is the point where decisions are made, and where the power slips away. The ability to regulate mobilized attention is nature’s parameter of evolutionary selection – the best/worst, successful/unsuccessful, effective/inefficient, adaptable/rigid.

At the moment of the feeling of a threat (not a threat yet), all animals without exception (land, water, air) including the human, tighten (contract) and squat (crouch) in order to leap (dart, shoot out). They mobilize.

Not all people can do it. Most people, instead of getting themselves into an instant mobilization state, fall into a freeze zone. (i.e. brain freeze, body freeze) It is some kind of, inner off switch.

Practice HORA trains inner trance-pliability, with it person does not freeze from pressure.

Trance Mobilization is a type of training whereby the trainee’s concentration of attention is deepened through narrowing the focus of consciousness to produce the maximum effectiveness. This training increases mobilization activity in a person’s body while maintaining open eyes and being engaged in various activities. If you are in business, Trance Mobilization will help person keep their thoughts focused on the task for an extended period of time at the maximum level of effectiveness, with a completely different burnout rate of your “intellectual muscles.”

If you are in sports, Trance Mobilization will help you compete at a completely different and more sustainable burnout rate, and to concentrate the entire body on the goal of throwing, jumping, running, etc. Before taking action, all athletes lower their center of gravity and relax to a maximum point where they are still in control, nearly to the loss of consciousness, in order to dash quickly, explode with power. As you can see, in sports as in business, all key parameters of animal success are used to the maximum effect.

All athletes know that if they overstay in the starting position/mobilization, they begin to simply "burn out," and forces quickly abandoning them. Then nervousness, a hysteria, comes immediately afterward. Sometimes it appears as "shaking." It can even result in a breakdown – apathy, indifference.

Eventually, from the small, primitive organisms a more complicated species – the human – arose, and he can learn to focus on his own self. On what one direct one’s energy/attention it is that what will feed him. What one is spending one’s energy for, that energy is what will be feeding him/her back. (Mutual-submergence, transformation, trance)

A human has the ability to learn how to mobilize differently by activating his/her trance-evolutionary mobilization center. Mobilization in calmness.  Trance-Evolutionary Mobilization is a different type of interconnection between mind, body, and nervous system. This is an incredibly creative and self-replicating force. For such a force to self-replicate, you must be the one who is focused on it. (You).

Mobilization is a simultaneous concentration of attention within the gravitational center. Every person has a body position in which his/her perception is at the highest point. The person is mobilized when a different type of breathing (not a common one) is activated. (The type of breathing that is in control of inner-calmness on its own). This is the type of breathing where the person is breathing with the entire body. This learned at the Practice HORA Basic level. Such a person is in a state of readiness, but without burning out. His/her inner resources are in controlled state; they are in the state of the readily available inner-reserve.

The word mobilization may sound simple and wild, and not as smart as Dzen, Chi, or Dhan’. However, Mobilization is a property of nature. It is everywhere as the primal quality of this world for all living and nonliving things.

The word trance may also sound not as smart or refined as meditation. However, trance is a property of universal nature. It is everywhere as the primal quality of this world. In our society mediation is associated with static pose and closed eyes, self-suggestion, and self-visualization. Trance is not the same as meditation. Trance saturates all cells from top to bottom from the smallest organ to the biggest organ.

Training of trance can help a person to operate in ever-increasing speed of life, resist tension and stress, and increase volume of information, and at the same time increase an individual’s pliability for new learnings and opportunities.

We are not talking about shamanic trance — the uncontrollable, induced, unconscious and exhausting trance. Look at the pictures and their expressions on the phases of the young individuals training HORA-TRACK, bright trance training, to understand the difference. (see below)

Trance — means presence within any environment. Trance in Practice HORA — is an ability to be present in evolutionary inner concentration of attention, correctly. As consequence, this is direct participation in the progressive development of a different type of interconnections between the brain, body, and nervous system. This is a controlled trance or correct evolutionary concentration of attention.

What is the difference between Dark Trance vs. Bright Trance

The bright and vital, evolutionary trance in which there is no tiredness — this is the difference of the HORA trance from all other existing trances. This bright trance, this dance of life against the dark, life-sucking trances, including substance-induced trances.

Learn how to naturally:

No substances are needed to achieve these benefits.  HORA-TRACK is built on the Evolutionary instinctual natural stability reflex. This is training of inner strength and concentration of attention.

Dark Trance: Photo of people on the narcotics, or in the substance trance

The temporary relief from tension using substances has a high price. The substance trance achieved at the expense of the individual's mind, body, family, friends, social personal goals.

See the list of notable people who lost their lives to substances and lost their opportunity to create and add value to society. http://en.wikipedia.org/wiki/List_of_drug-related_deaths

Photograph of people in a state of dark trance, followers of other famous systems

A number of modern youth superstars depend on substances for his/her creativity. What is being promoted in such cases? Allegedly, this person is experimenting, etc., because it appears as if he or she is a creative personality, and thus free. He deceives everybody in order to convince himself of the opposite — he is a person that depends on the substances, and advocates and promotes not freedom, but enslavement. When children start using substances, they are initiated into this by society and social environment. It allows all this to exist; it allows such a word as "experiment" to promote and instill in young people's psyche a pseudo-liberty — it is the dark drug trance.

Compare it to the Trance in HORA-TRACK™

In HORA-TRACK, the mind and the body are developed simultaneously, not separately. HORA-TRACK provides an opportunity to rejuvenate and bring back from the point where life is disappearing. The principle of the Trance-Evolutionary Mobilization HORA Dance (HORA-TRACK) is based on the ability to arouse the nervous system, to give the entire body a chance to ring in a state of trance. In short: activation to reach your life's maximum potential. 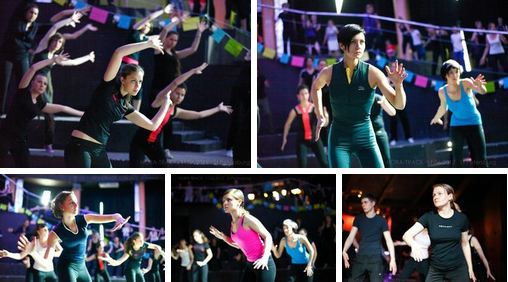 The HORA-TRACK athletic training is intended for everybody who is exhausted, and for every type of exhaustion. Not only the exhaustion from substance use, but also the exhaustion that comes from aging, stress, emotions, creative work, etc. Learn more about the next HORA-TRACK event in Chicago.

Because evolution is not narrowly focused the Trance-Evolutionary Mobilization is not as narrow as Trance Mobilization, it encompasses everything. It trains a completely different type of connection between mind, body, and nervous system through a manifestation of the Evolutionary Universal Trinity Law:

This allows a person to live in the universal informational union utilizing this different type of inner connection while being engaged in various business/social activities. Trance-Evolutionary Mobilization, (trance-mobilization) within the HORA method is the “know-how” of how to accumulate energy while you are spending it - the life super endurance.

PRACTICE HORA® — The next evolutionary step of humankind a human will make consciously™.

(Based on the conversations with Master HORA & some excerpts from Master HORA latest book “Gravitaneer”. Part 1)

"I noticed that desire to solve or cope with one’s specific problems/situations lead to Practice HORA training, but a person stays in the practice because of an understanding that there is something more to it." Valerya Dubinina 23 years old student

At any phase of action, you can consciously restore the potential that you had in the beginning. Julia Abramova, 20 years old student

The wishlist is empty

The cart is empty